Talking a Load of Ship With the Latest Unearthed Arcana

Load the cannons and splice the mainsail, ‘cos this month we’re taking a trip into the briny ocean with Unearthed Arcana: Of Ships and the Sea.

As the name suggests, the latest batch of playtest material for Dungeons & Dragons 5E lays out rules for a life at sea. It has information on how fast ships can travel in different conditions, guidelines for dealing with icebergs and other watery hazards, and a whole load of stats for different ships.

This last bit is particularly cool, and sets up ships as – essentially – particularly large and cumbersome creatures rather than floating terrain. It also comes with one of my favourite notes found in a D&D supplement:

Ships usually have a score of 0 in Intelligence, Wisdom, and Charisma.

While this seems to just be a weird thing to make clear, it does raise the possibility that further down the line we might run into ships that don’t have 0 in all their mental scores. And when we start thinking about intelligent ships, it’s only a small leap to the possibility of branching into D&D’s half-abandoned foray with weird sci-fi – Spelljammer.

This kaleidoscopic off-shoot of a setting had parties cross the cosmos in magically-powered ships, bowling their way between planets and planes and encountering some of the craziest creatures to ever hit a gaming table. My personal favourite among these is probably the Giff, a race of gun-toting mercenary hippos usually given upper-class British accents. They actually made a return to the game in Mordenkainen’s Tome of Foes, and the appearance of rules for ships has led some to speculate that a return for Spelljammer may be peeking over the distant horizon.

Others have mentioned rumours that we may well be expecting a piratical adventure for the more conventional Forgotten Realms setting, with this playtest functioning as a way to roll out more robust sailing mechanics.

Anyway, let’s dispose of the speculation for the moment and turn back to the rules at hand, which are surprisingly deep for just nine pages of material.

This shouldn’t come as a surprise to anyone, but ships are pretty big. So big, in fact, that for the first time I can think of D&D 5E has moved away from modelling everything as a square. Instead, we now have access to the wonderful world of 80 ft. by 20 ft. rectangles that bristle with ballistae.

We have seven stat blocks to choose from, ranging from magnificent warships to puny rowboats.

Statting up these things does occasionally produce some weird results, however. Apparently most first-level fighters have a higher Constitution than a 60 ft. Keelboat, and anybody who dumped Dexterity would find it hard to out-dodge a rowboat. As with many edge-cases, it’s probably best that you just don’t think about this.

One nifty thing about the rules as they are is that every ‘system’ (helm, sails, weapons) can be individually targeted. If you can drop enough damage into your enemy’s helm they won’t be able to steer, letting your own ship run rings around them. This could lead to some very interesting tactical choices. 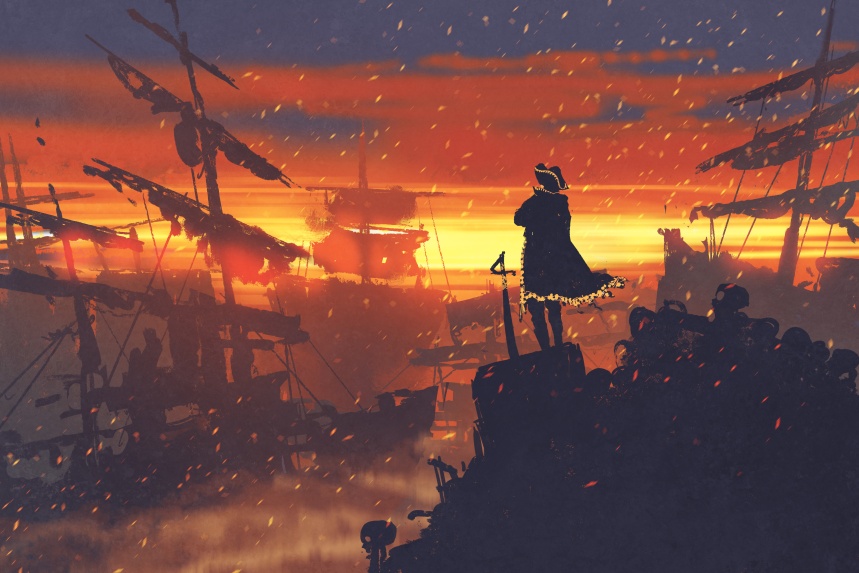 A couple of pages of this little update are devoted to the crew of any ship, setting out roles that player characters could easily slip into, each with their own niche.

The first mate, for example, is needed to keep the men and women working the sails and decks in line with charisma checks of their choice. The surgeon, meanwhile, keeps the crew healthy while the bosun tends to the ship itself

While these could easily be NPCs, the set-up easily lends itself to installing player characters as officers, along with a mostly faceless crew tending to things behind the scenes. There’s a major focus on keeping everyone on board happy and well-fed, which fits in with most of the historical accounts of mutinies and piracy in pop culture.

Some of the nitty-gritty parts of tracing crew quality and morale seem like they could be a little too tedious and focused on book-keeping for D&D 5E, but other parts seem as though they would be incredible fun to play.

For example, the line officers can give orders to their underlings during a combat encounter, providing bonuses to speed or weapon accuracy depending on which parts they choose to buff.

This isn’t the neatest of most obviously useful set of playtest rules that WotC have ever put out, but it’s got some good ideas and – more importantly – provides great inspiration for other players to draw from.